We had a five hour run in a fast electric train to get to Florence. The time passed quickly as the country was interesting. For miles we saw vineyards everywhere. These were different from those I had seen previously. They were on flat country and the vines were like trees as far as the trunk is concerned. They were just throwing out their shoots and the pale green of the leaves was very beautiful. 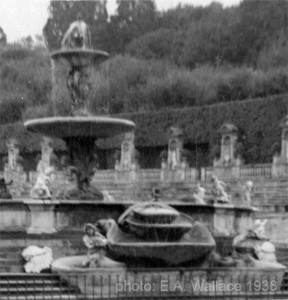 During the last few days Elizabeth has been making love to the head guide and so it was quite natural that he should want to take us out at night after we arrived. Consequently we went to one of the Italian cafes. These are everywhere throughout Italy. In the warm weather people sit outside as well as inside. An orchestra supplies good music and sometimes they have singing also.

You go in and select a table, order your refreshment of whatever kind you like from the best wines to ordinary lemon squash and tea or coffee. Then you can sit there for the rest of the evening and talk and listen to the music. It was quite entertaining to watch the different people. Unfortunately we could not hear what they were all talking about, but I believe one man who was very interested in us could speak English, as he showed more than once that he understood our jokes. These cafes are filled each evening and the cost is only a few pence.

Next day we visited another cathedral which is the third largest in the world. We also went to the art galleries where we had expected to see many of the world’s most famous paintings. 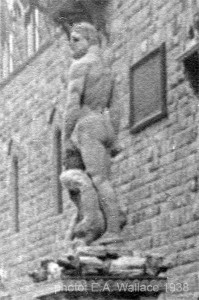 We went to a mosaic factory which was most interesting. This factory has been in operation for hundreds of years. Here they made some of the beautiful mosaics in St. Peter’s cathedral of Rome, as well as those for many other cathedrals. This is the process very briefly. A coloured drawing is made of the subject to be put into mosaic. Then the coloured marble from all parts of the world are selected and minute pieces are cut out with a kind of flat saw. In one small picture about a foot square there were over 7,000 pieces of marble. When the guides were telling us that the wonderful “paintings” as I know them which were shown to us in the cathedrals were made in mosaic I did not quite understand how they could get all the brilliant colours and the very small details, such as the eyes of a person. Here it was quite clear and I cannot think of any work requiring more combined skill and art. It is wonderful to think that all of these pictures we saw in the various cathedrals are actually done in stone.

Florence is a very old town and is interesting from an historical point of view, but it is recognised as being the art centre of Italy. The paintings we saw in the royal palaces were priceless. There were some which required a day to study and have explained. We saw many artists making copies of those most famous. Some of those artists had worked in miniature only and worked with a magnifying glass all the time. I saw some of these through their glasses and it was wonderful to see them get such excellent detail in the very small space. I saw the portrait of a head not much larger than a 1d. and yet even the eyes were as perfect as the original. In other cases artists were making exact copies. The guide told us that only the best artists are permitted to do this.

We saw a copy being made of a picture three feet square. It takes two months, working all the time, for this to be copied. That means only six copies could be made in a year. As they have applications from artists all over the world for permission to copy, some of those applicants will have to wait about 15 years before their turn will come.

In the afternoon we went for a drive around the city and up to Michael Angelo’s Square, a position on a hill which looks down on Florence. Then we were taken to where Michael Angelo was buried in the cathedral. In the same place was the tomb of Galileo with a wonderful piece of sculpture above it. 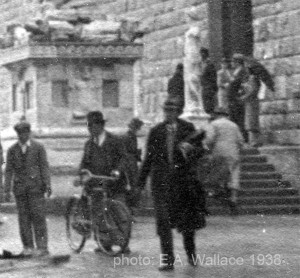 We heard there was to be some Grand Opera in the evening and we booked seats. It was not a complete opera, but consisted chiefly of Hungarian dancing. This was the most original dancing I had ever seen. Not a word was spoken and yet a whole play was acted by dancing to music. We were glad to see something like this while we were in Italy. As far as I could see I was the only one who was not in evening dress, but I did not mind that. It started at 9 o’clock and finished at one in the morning. It was therefore about 2 o’clock before we got to bed. The theatre was crowded and as our seats cost 100 lire each (25/- New Zealand money) it must either pay to have Grand Opera in Italy or it must be very costly to produce it. I understand the dancers were brought from Hungary specially for the show.

We saw many wonderful things in Florence, but I will just mention one more. This is the bronze doors of the Baptistry which were made by the artist and sculptor Ghiberti in the 14th century. There are two sets each containing two doors and each door has five panels. The first doors took 27 years for Ghiberti to complete and the second pair took 22 years, making a total of 49 years for the complete work, which shows that it was the life work of this great man. Each panel represents various events from the Old Testament and the life of Christ. It would take weeks to properly study them and we were there for a brief hour. They were the doors which Michael Angelo described as being fit for the gates of paradise.

While we were seeing the doors we watched two babies being baptised. It is the custom for every child born in Florence to be brought to this Baptisty to be baptised. The service was rather amusing, as both babies were crying while the priest was carrying it out. At the close each baby was held over a large font and at least half a pint of warm oil was poured over the head. Strangely enough, when the water touched the head of each baby the crying stopped. It was more like a bath than a baptism as we know it.

Speaking about baths reminds me that they have queer customs with regard to the bath in all of the continental hotels which we have so far visited. In the first place baths are extra. Secondly, there are very few bath rooms. Thirdly, when you eventually get your bath after making application to the room steward the bath is filled for you and you are give two towels. One is a large rough towel six feet long and nearly four feet wide. To manipulate this towel takes a bit of skill. You are also given two small towels, one for your face and the other to stand on after bathing. You are not supplied with any soap and immediately your bath is over the room is again locked up.

The next day was Sunday, 9th May, and as Monday was a national holiday in Italy to celebrate the first anniversary of the conquest of Abyssinia, the shops were kept open.

Although it was raining we went out to see something of the shops and I was particularly interested in a number of shops on a bridge across the Arno river which runs through Florence. It is only a narrow bridge and not very long and yet there were 60 or 70 very small shops on both sides. Every inch of space was valuable as it would appear the bridge is a very busy shopping centre. The doors to the shops are so small that you can just squeeze through them.

In the afternoon we caught the train to Venice.